View a Published in PDF Version of the report.

The state budget of Kuwait has been struggling since the oil-oversupply crisis; ending in very large deficits over the past few years. In a conference held in January 2020, the former minister of finance announced the unprecedented amount of deficit of KWD 9.2 billion in the fiscal year 2020/2021. Within the arena where politicians raise their populist speeches in this matter and only criticising superficial consequences, comes this report to expose the real cause of the significant deficit and show a valid path to conquer such a daunting treasury dilemma.

Economic Model of the State – EMS

Understanding the direction to the root of the issue essentially requires a basic visualization of the economic model of the state. 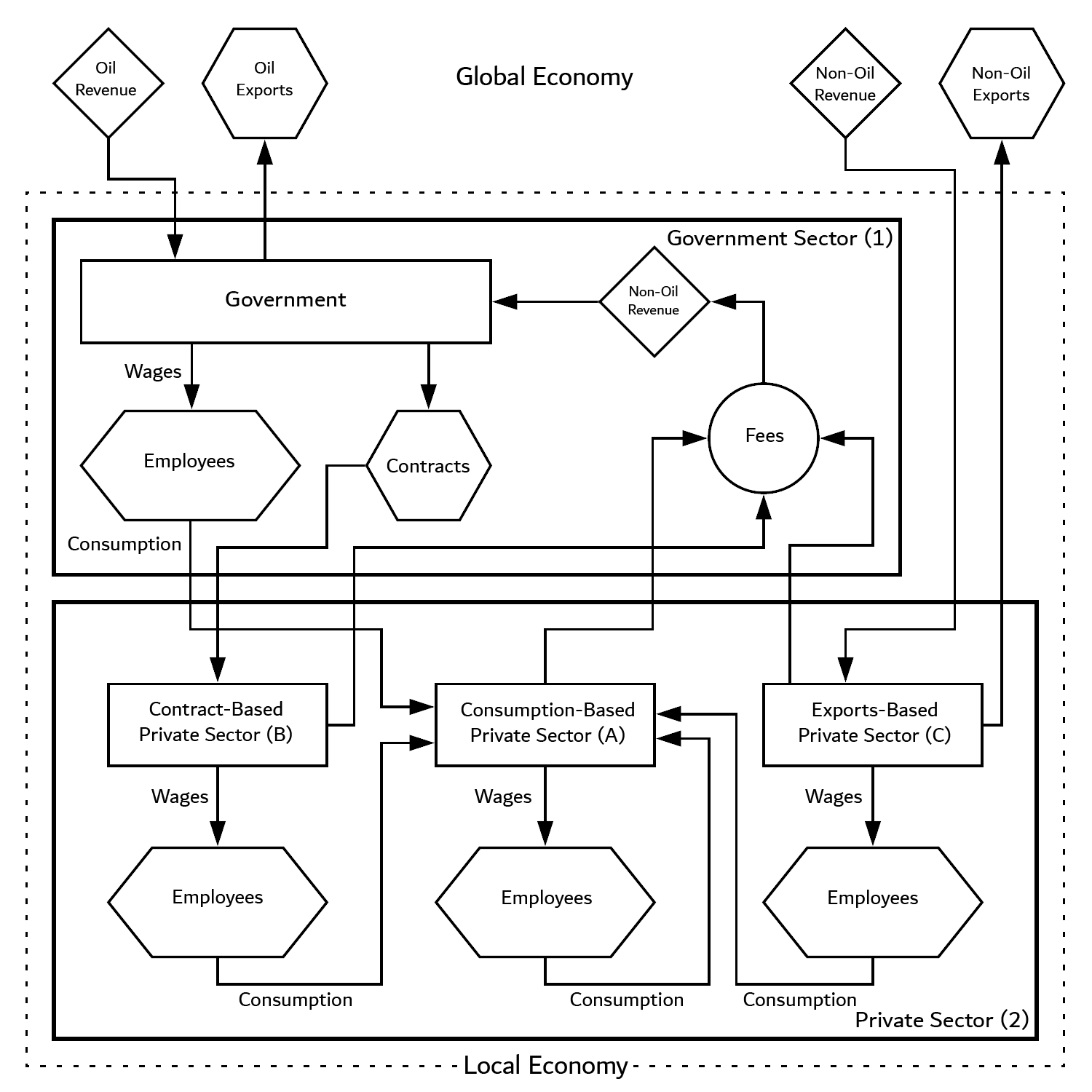 Government’s fiscal year budgets are dependent upon yearly revenues and expenses; beginning on the 1st of April to the end of March in the following year.

Considering the fact that the government has no real effective influence over OPEC’s decision-making process, it is very essential to acknowledge that (OR1), (OR2), and therefore (OR), are internally uncontrollable.

The total fiscal expenses (TE) is a mixture of three main expenses: (1) fixed (FE), which are internally controllable by curbs and other governmental policies and reforms, and they can be capital, consumptional or both; (2) variable capital (VCAE), which can neither be classified as internally controllable nor uncontrollable as they are swinging expenses between the two scopes based on current strategy implementation led by the government; and (3) variable consumptional (VCOE), which cover the state’s whole wages system.

The variable consumptional expenses (VCOE) are governed and protected by the constitution, which strictly obligates the government to provide citizens with proper jobs, including within the private sector by setting private wage incentives or support. And considering the fact that the government has no real effective influence over the average number of increase of newly-born citizens, it is very essential to acknowledge that (VCOE) are internally uncontrollable.

The analysis of collected historical observations –starting in 2015 to the end of 2019– gives clear indication that variable consumptional expenses (VCOE) weigh on average 57.6% of the total expenses (TE), and is increasing 4.3% every year, at the rate of KWD 512 million.

Considering the observations of GRF’s balance, we see that it has been a main source of covering previous budget deficits, hence roughly decreased in value from KWD 63.4 billion in March, 2014 to KWD 20.6 billion in September 2019.

Many populist speeches have criticised or had no belief in such budget deficits, rationalising their opinions on corruption incidents and the insufficient utilisation of cash resources. Nevertheless, such rationale hasn’t gone beyond mentioning the strength of value achieved by the returns on investment in the Next Generations Sovereign Wealth Fund.

Statistically, NGF’s value has exceeded KWD 200 billion. Considering the worst-case scenario while operating with insufficient utilisation of resources, at least 3% can be achieved as a return on investment from NGF, initially incrementing KWD 6 billion every fiscal year. This amount is the basis upon which the politicians are building their opinions on; accusing the government of misleading the public with false financial figures and artificial deficit.

However, the public may not be aware that NGF is funded and protected by the law. The fund is fully isolated from the budget, as well as its investments and yearly returns. Breaking into this isolation basically requires a new legislation. Apparently, politicians cannot raise that issue as the likelihood that H.H. the Emir will approve such a law is very low. Therefore, for politicians, the publicity outcome of raising false accusations in this matter is more beneficial than raising mature, truthful and wise thoughts.

Connecting the dots can be quite easier now: considering government’s non-oil revenue figures, we are more able to visualize the very tiny weight of the exports-based private sub-sector (C) in the economic model of the state, hence giving it almost ineffective contribution to the related factors in our total revenue formula. Such visualization makes us realize that a very large portion of the state’s economy is very dependent on oil revenues.

At the same time, we can see that a very large portion of the total expenses is continuously increasing at an average rate that will eventually be higher than the average rate of increase in the de facto source of state revenue, oil.

Accordingly, whether taxation or curbing policies alone were heavily put in place, the budget deficit will not be eliminated for good, but rather delayed. And the reason is quite simple! Without enhancing the weight of exports-based private sub-sector (C), although taxation and curbs are considered non-oil revenues, they in fact were sourced by oil revenues, delivered to the public as variable consumptional expenses, and have been partly taken back as non-oil revenues.

The real cause of the state budget deficit isn’t just as simple as financial waste, corruption, isolation of returns of sovereign funds or insufficient government operational management. These are just microeconomic and organisation-behavioral consequences of the real macroeconomic cause, which has created the mixture of so many complex problems leading the country towards this continuous financial deficit we have witnessed in the past several fiscal years.

Overcoming such a macroeconomic issue can be quite straightforward in a dictatorship. However, democracy such as ours in a rentier economy makes the process much more complex as the aspect of conflict-of-interest weighs much in the decision-making process.

It is the role of a supreme entity to set a valid promising macroeconomic vision, to list its endless goals and draw the strategies to achieve every single goal. Such strategies do not only involve executive officials in the government, but also members of the parliament to achieve the required legislation.

Conflict of interest in the decision-making process is one of the main obstacles. Hence, one of the main vision’s goals is to eliminate that. The strategy to implement so is to introduce bold and smart legislation first, especially the ones that tend to eliminate political corruption, economically. As we live in an economy where someone’s self-interest can be achieved without achieving the public’s, these new legislations must reverse the notion so whenever a person’s self-interest is achieved, public interest adds up. Hence, employing and contracting must be signed based on qualification and efficiency, not loyalty or nepotism. Whenever the decision-making process begins to heal, strategies of other goals can be achieved smoothly.

We’re not here to elaborate on the vision, goals and strategies, which would finally swallow almost all superficially raised issues by transforming Kuwait from a rentier state to sustainable. We’ve already done that in a publication under the name “Kuwait of the Sustainability”.

The publication sets three sub-visions with four main connected goals and collaborative strategies. Jabir Fund strategy to eliminate the influence of conflict-of-interest in the decision-making process and to enhance non-oil exports. Triple Economy strategy to accelerate transforming the economy to a non-oil export-based economy. Well-Being strategy to ensure high living-standards for citizens and expatriates. Finally, Knowledge Economy strategy to enhance the existing and upcoming labor force in moderating other strategies to achieve their goals. Following such strategies, the sub-visions named Sustainable Economy, Luxurious Society and Solid Culture can be realistically achieved by 2035.